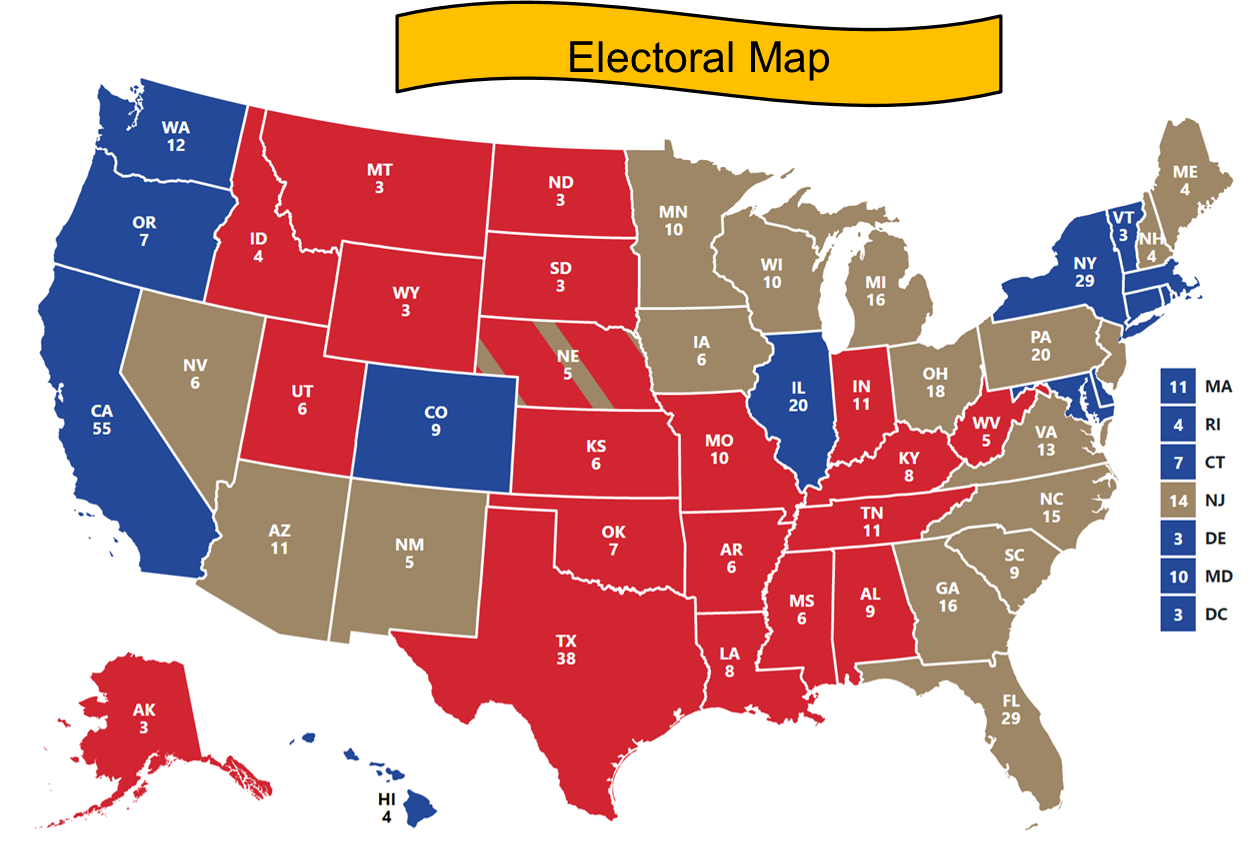 I am sure you are all very aware of the upcoming general election, it can be rather contentious and overwhelming, but it does not have to be all about politics, it can also be about math! What better time to discuss our election process and use logic, reasoning and math to better understand the process.

Our US Constitution sets forth an electoral vote process. This means that when Americans cast their votes for president, they are in reality directing other people – called electors (we will get into this in a moment) to vote for the candidate who receives the most votes in their state. The Electors are the total member of Congress (Senators & House of Representatives) each state has representing them. The Constitution dictates that each state has two Senators (total of 100 Senators) and the number of House of Representatives (current total of members 438)  is determined by population as provided by the Census, which takes place every 10 years. This year is a Census year. (Make sure you fill out your Census)

As you can see, all this information to determine an election is about numbers. Math plays an especially important role in our election process.

Here is a fun way to get students involved in the electoral process. See the attached map with each state electoral vote count.  There is also a virtual one at this link . On the map there are some states that are red and some that are blue. This means that historically these states have voted one way, that does not mean this is the way these states are leaning in this election. (Authors prerogative, I set the states up this way as a starting point.) A presidential candidate would apply these states electoral vote in their vote count. The total amount of electorates available is 538, it takes half of that number plus1 to win the election. What would be the number of votes needed to win the election?   Here is a PDF of the game.

Two states, Maine and Nebraska passed laws that allow their electorates to split their votes. Two votes in each state goes to the popular vote of the state, the remaining votes (2 in Maine, 3 in Nebraska) to the popular vote winner in each congressional district.

You might have heard the phrase, won the election but lost the popular vote.  What does that mean?  There are some states that hold high population of Americans; CA, NY, TX, FL, but they have only so many electors and that number is the only amount that can be represented when selecting a president.

Students will need dice or a number generator, an electoral US map,

·      Students will divide up in to a blue team and a red team. They will use the map, with colored red and blue states, to determine their starting total of electoral votes.

·      The team that did not win the state gets the selection of the next state they want to try and win the electoral vote.

·      Students continue selecting states until one team has reached the 270 total and becomes the President.

·       If there should be a tie in any state, each team has rolled the same total.  That states electorate vote is put on hold, and students continue.  If neither team can reach 270 without that states electoral vote, they can go back and reroll that state.  (know that in reality, they would recount the votes to see if there were any miscounts and if still tied some states have gone to a coin toss.)

·      Congratulations to the winner.  Although the election is held on the first Tuesday in November, winner cannot be sworn into office until Jan 20(Jan 21 if the 20th is a Sunday).

Try this activity with taking out Texas, NY and California, the most populous states, and find a path to 270.

Share this fun President Poll with students to help build understanding of averages and polling data.