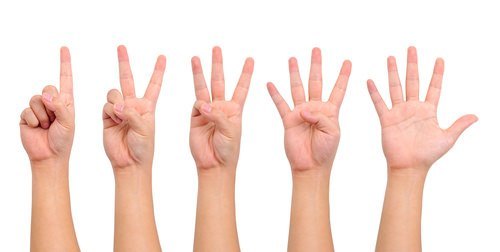 Fingers and Toes, Yes or No?

We have all come across students who will use their finger to try an add, subtract, multiply or divide (well maybe not divide) often times it looks like this https://www.youtube.com/watch?v=KdxEAt91D7k&t=15s

Is this okay or not okay for students to use their fingers in math?   The 2016 Atlantic article entitled Why Kids Should Use Their Fingers in Math Class, written by well known math education professor Jo Boaler from Stanford University, says yes.  But like a lot of article, headers can be very misleading.  Reading further and reviewing the research, it talks about finger gnosia with children in Kindergarten and 1st grade.  Finger gnosia is the ability to distinguish, name or recognize the fingers.  For example, if you had your hands covered and couldn’t see your fingers could you identify your right ring finger.

The research shows that young children with good finger awareness are better at performing quantitative tasks than those with less finger sense. Neuroscientists have noticed a connection between the part of the brain that handles finger awareness and mathematics.  Finger counting has one unique property that sets it apart from written or verbal counting systems: it is a sensory-motor experience, with direct link between bodily movement and brain activity.  Students who used their fingers to solve simple single digit arithmetic problems most often get them all correct.  This only goes so far as simple single digit arithmetic, after that finger counting does not support fact fluency.

What does that all mean?

Children at a young age should be aware of their fingers, as this has a direct brain/neurological connection.  Playing games that have students identifying fingers is important.

Click here to down load activities that help finger gnosia. Have students hide their hands in a box where they can’t see their fingers and have them identify which is which.

Have students interlock fingers and determine which finger is which.

Finger counting is not innate, it is taught. Children at a young age are taught to represent their age by using their fingers, represent what they want with their fingers, “I want two cookies” and shows two fingers.  This then transfers into seeing a number and representing that number with fingers to assist with adding.  Some children have this instilled during their toddler years either by their parents or their childcare provider, others may not be introduced to finger counting until they enter school.

Educators should be aware that different cultures use their fingers for counting in different ways.  Interestingly, if you’re European, there’s a good chance you started with closed fists, and began counting on the thumb of the left hand. If you’re from the Middle East, you probably also started with a closed fist, but began counting with the little finger of the right hand.

Most Chinese people, and many North Americans, also use the closed-fist system, but begin counting on an index finger, rather than the thumb. The Japanese typically start from an open-hand position, counting by closing first the little finger, and then the remaining digits. In India, it’s common to make use of finger segments to get as many as 20 counts from each hand.

There are effective and ineffective ways for students to use their fingers.  Effective ways move students from finger counting to fact fluency and higher level mathematics.

Effective ways to use finger in mathematics:

Transitioning students from their fingers to tangible objects is a must.  A great way to do that is with a ten frame.  The two columns of 5 directly relate to their fingers and gives them a different visual to set to memory.  Dots can represent fingers up and blanks can show fingers down.  This can also transfer to an understanding of what two numbers added together make ten and the start of math fact mastery.

This is where helping students understand commutative property, numbers may be added or multiplied together in any order, is important to establish.  If a student has a problem “Jose had 5 apples and was given 12 more.” Most students will hold the 5 in their head and counts on 12 more because 5 came first in the problem.  This poses some problems as students only have 10 fingers and adding on twelve involves them recounting fingers.  Students with an understanding of number sense and math vocabulary will understand the word “more” means adding on and they can start with either number.

A good suggestion to address this issue is using a deck of cards to generate math problems.  Place one card in the middle and then add cards from the deck either to the right of the target card or to the left.  They address which card is larger and then add on the smaller card.

Example: 2 is the target card, 6 is dealt in front, which is bigger, add on the smaller.

Second Example: 2 is target card, 4 is larger player then add on the two.

This can also apply to multiplication.  Students can use their fingers while skip counting/counting by a multiple.  They may start with a multiple they know as their starting number.

Counting On is not a bad place for your first graders, with single digit addition and your 3rd graders, skip counting on their fingers for single digit multiplication. But this is not where we need students to be as they progress through mathematics.  Student absolutely need to be fluent if they are going to succeed in higher level math.  Fluent doesn’t mean rote or memorized.  There are definite facts we have memorized, but those that we don’t have memorized often results in students falling all the way back down to the counting phase.

Derived Facts or Fact Strategies, is when we figure out an answer by using what we know.  In order to prevent that complete slide to the finger counting phase we can teach students to “derive facts”.   A child may see 4 + 7 and thinks, “I know 3 + 7 = 10, 4 is one more than 3 so the answer is 11.” is deriving facts which is considered fact fluency.

A great game to help students with the “derived facts” is call Cue here is a video of how that game can be played. This is for helping student develop fluency in their single digit addition or subtraction.

For multiplication, there are certain facts that are easier for student to memorize like 2s, 5s and 10s.  If students are presented with a multiplication problem of 7 x 4, visually that is seven groups of four.  Students should be shown this visually to make sure they grasp the idea of what multiplication means.  Finger counting can be used to help them become fluent.  Students have 5 fingers on one hand and 2 fingers on the other to represent 7.  Many students may already know 5 x 4 = 20 (represented with 5 fingers on one hand counting in multiples of 4).  Many students may also know that 2 x 4 = 8.  20 + 8 = 28 same as 7 x 4

Going back to our original question, is it okay for students to use their fingers in math.  The answer is yes but only if we teach them effective ways on how to progress off fingers and into fluency.

Check out more of our lessons at MANGO Math